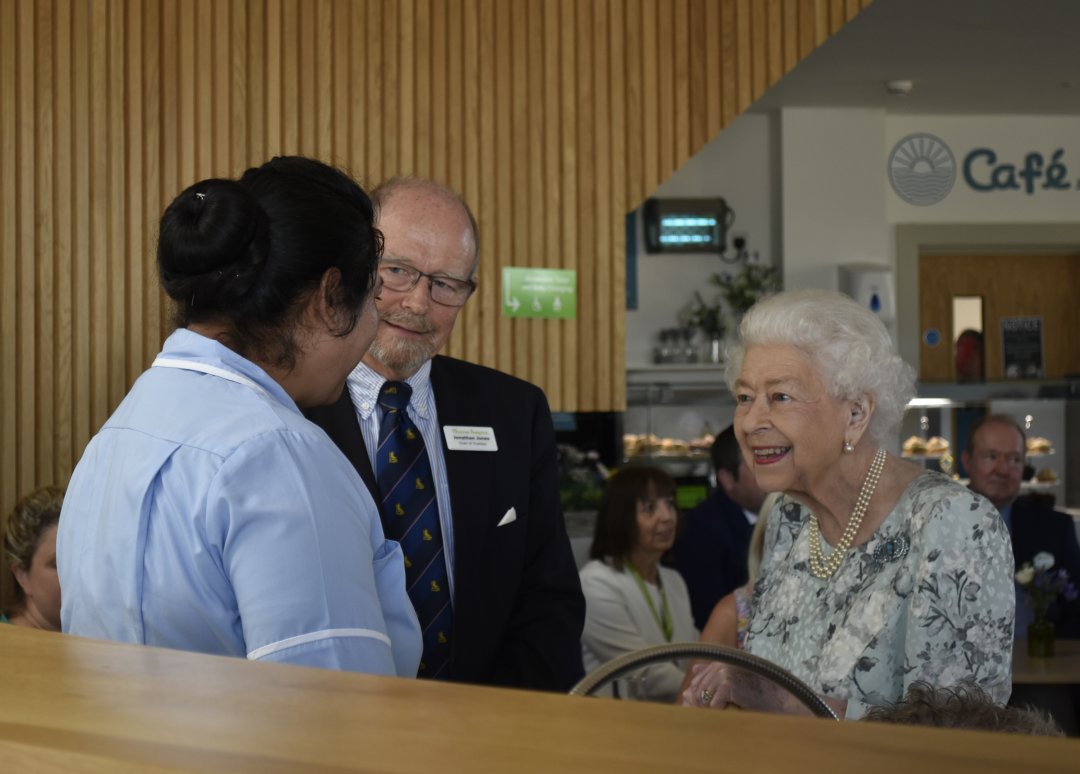 On 15 July 2022, Her Majesty The Queen formally opened Thames Hospice’s new, state-of-the-art 28-bed facility in the presence of staff, volunteers and supporters, as well as patients and their loved ones currently being supported by the Hospice.

The charity, based in the Royal Borough of Windsor and Maidenhead, has been providing compassionate inpatient and community hospice care to its community for 35 years, and is now one of the largest and busiest hospices in the UK.

The Queen first opened Thames Hospice on 9 November 1987 and today’s historic occasion marks Her Majesty’s fourth visit to the charity. Accompanied by HRH The Princess Royal, The Queen met and chatted to volunteers, staff and Pat White, a patient currently receiving care on the Inpatient Unit.

Her Majesty and Her Royal Highness were joined on their visit by HM’s Lord-Lieutenant of the Royal County of Berkshire, Mr James Puxley, Thames Hospice Chair of Trustees Mr Jonathan Jones and Chief Executive Officer Mrs Debbie Raven.

Jonathan Jones said: “Today’s momentous visit builds upon a long-held association between The Royal Family and Thames Hospice. It is a huge privilege to welcome Her Majesty to officially open our facility and show how the charity continues to flourish 35 years on from The Queen’s very first visit.”

During the royal visit, Her Majesty officially unveiled a plaque to celebrate the opening of the new Hospice. The plaque will be permanently mounted at the heart of the Hospice, to mark The Queen’s long-term support of the charity.

The Princess Royal also had the opportunity to tour the Hospice, meeting nursing colleagues and patients on the Inpatient Unit.

Debbie Raven added: “It was a delight to welcome Her Royal Highness on her first visit to Thames Hospice. We are so grateful that she took the time to speak to a number of patients, as well as many colleagues in our frontline teams.

“Our official opening marks the start of an exciting new era for Thames Hospice and our facility will continue to offer vital support to everyone who needs palliative and end-of-life care now and for generations to come.”

Recognising the urgent need to provide more care to more people, the Hospice’s Board of Trustees and Senior Management Team, led by Debbie Raven, launched an ambitious five-year strategy focussing on its expansion plans. In 2017 Thames Hospice was granted planning permission to build a new £22 million state-of-the-art facility on an eight-acre site by Bray Lake.

After more than four years of meticulous planning and construction, coupled with a challenging 12 months during the coronavirus pandemic, Thames Hospice welcomed its first patients and visitors to its new facility on 12 October 2020, creating a centre of excellence for modern hospice care. The new facility means that Thames Hospice is able to provide world-class care and support to twice as many people at every stage of their life-limiting condition now and for generations to come.

The charity has doubled the volume of services in both activity and variety, delivering care and support to an average of 850 people per month on the Inpatient Unit, in people’s homes and through its living well, therapy and counselling services.

Debbie added: “None of this would be possible without the incredible support from our community who fund over half of the £13 million needed each year to run our services, so that care can remain free at the point of access for patients and families.”