91 year old Carmel was admitted to Thames Hospice for end-of-life care in February 2021, expecting to spend her final days in the Hospice. Yet after six weeks of compassionate care and support, Carmel’s condition dramatically improved and she was able to return home to her family. 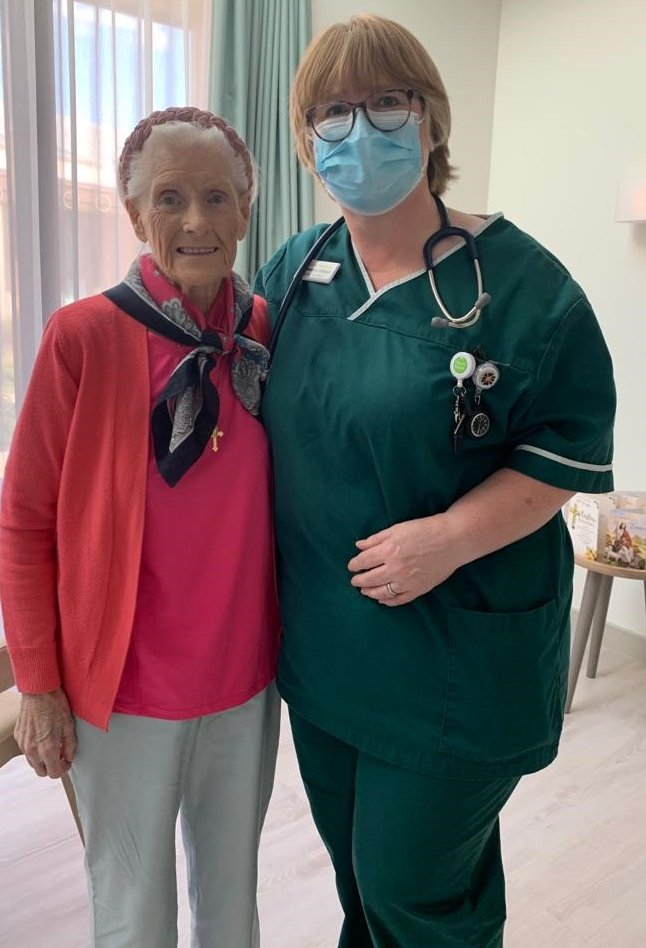 Carmel was born and raised in Dublin, Ireland, before she left in 1954 to move to Slough with her younger sister. It was here in Slough that she met her soon-to-be husband Joe at an Irish Dancing Club. The couple dated for 18 months before marrying in their hometown of Dublin in 1957. Carmel and Joe formed a life together in Slough, where they raised their two daughters Mary and Bernadette. Joe was a self-employed painter and decorator, whilst Carmel worked in factories before settling into a caring profession for 11 years, caring for the elderly in their own homes. The couple now have five grandchildren together who they enjoy spending time with.

Earlier this year, Carmel’s health had started to deteriorate and she was admitted to Wexham Park Hospital. She was suffering from depression, had lost a lot of weight from not eating, was experiencing dizziness and had developed pressure sores on her body. It was decided that it was time for end-of-life care, so was referred to Thames Hospice as per the wishes of her family. Carmel was admitted to our Inpatient Unit under the care of our Otter Wing team. Carmel said: “I can’t really remember much before coming here to be honest. I was not eating properly, I had neglected myself and had really gone downhill. All I can remember in between that was waking up in this room at the Hospice.”

Katherine Gilbert, Nurse Consultant at Thames Hospice, was one of the Hospice team responsible for caring for Carmel. About her admission, she said: “From the beginning Carmel was such a warm, kind lady even though she was really poorly when she arrived here. She was very frail, bedridden and barely eating. Carmel was also on a number of different medications and supplements, so the first thing we decided to do was to simplify on the things that really mattered and encouraged her to eat.”

Carmel speaks highly of all the Hospice team and the care she received: “From day one at the Hospice they started nourishing me. I began eating and started to feel better, I loved the food here. Katherine (Gilbert) has been wonderful, giving me confidence again.”

Katherine explains the care put in place to support Carmel on the Inpatient Unit, to give her the best quality of life we possibly could:“We really nurtured her, she’s a lovely lady and everyone loved her. We gave her proper old-fashioned nursing, lots of TLC, encouraging her to eat, encouraging her to do the bits she could do, and supporting her with the bits she couldn’t do. Slowly she started to improve, she became less muddled, she was more engaged, she looked forward to dinner, she just started to get a little bit more involved in things.” 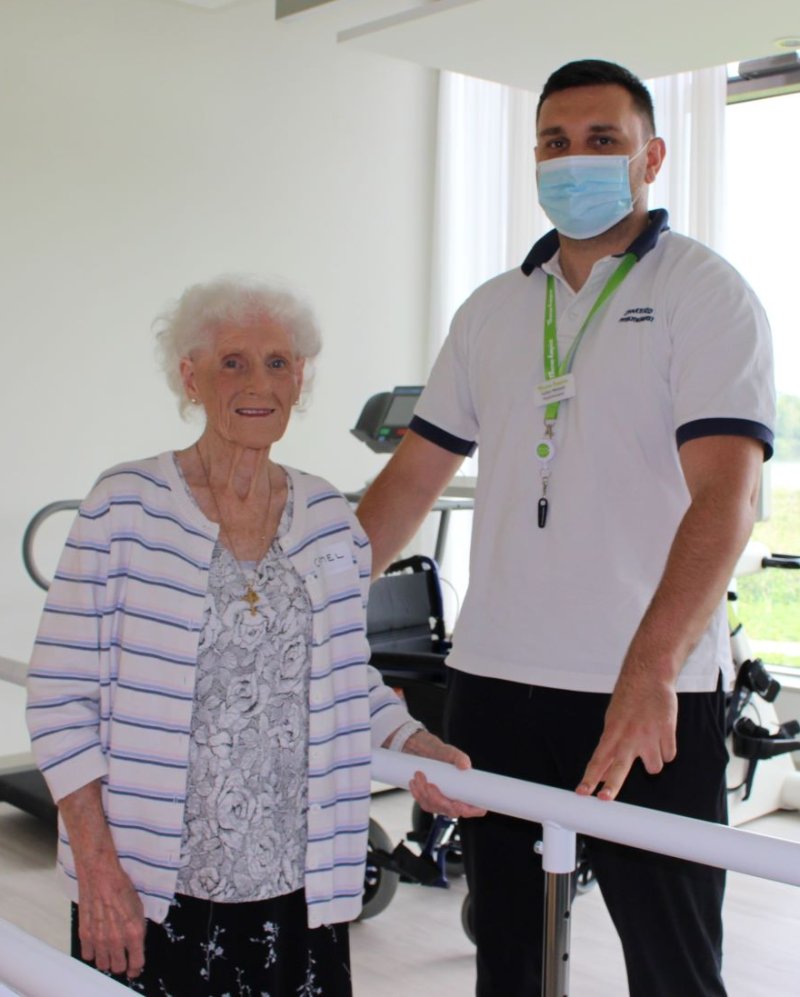 As well as nursing and medical care on our Inpatient Unit, Carmel worked with our Physiotherapists, Iulian and Suki, to regain strength and improve her mobility. She said: “I have been having physiotherapy and going to the Rehabilitation Centre at the Hospice every morning. Iulian has really helped me get stronger, and Suki is marvellous, so caring. I am walking unaided and without my frame now. I have also had support from the Pastoral Care Team. Each day here I feel better and better.”

Katherine commented: “It really shows how all the different teams work together to support our patients. Our physiotherapists have played a really vital role in helping Carmel get stronger and more mobile. She loves working with Iulian and Suki, it’s really given her a confidence boost that she can do it.

“I will never forget the day I took her outside in her slipper socks. She didn’t have any shoes here, because who brings shoes when they think they are going to die? I took her for a walk in the gardens and it was the first time she had been out of her room, it was a lovely sunny day. We slowly went a bit further, but whilst I was holding her I realised I don’t need to, she is quite steady on her own. When she came back, all the staff had tears in their eyes because we could suddenly see she was going to be okay, she was going to go home!”

Katherine continues: “The physiotherapy, getting her medication right, managing her blood pressure, good nutrition, emotional support – it’s all helped Carmel and made an incredible difference. Everyone has worked really hard together to get her to the place she is at now, we have been with her every step. Of course this also couldn’t have happened without her determination.

“Carmel has worked really hard to get to the good emotional and physical place she now finds herself.”

After six weeks on the Inpatient Unit, Carmel was excited to be discharged to go home and enjoy her life again with her beloved husband and daughters. She said: “I’m so grateful to the team here, they brought me back to life, and they saved me. Joe and my daughters are so grateful and thankful, they can’t believe it! I will be my old self again. This place, this Hospice, I can’t say enough, it’s amazing where I am now. This Hospice has made me stronger, better, feeling amazing. I will never ever forget this place, who knows what would have happened without them."

Once Carmel returns home, a care package will be in place and district nurses will be there to support her should she need it. Carmel is now accessing our 'living well' services at the Hospice as an outpatient.

Katherine explains how it is unusual to see such a dramatic transformation in patients with a life-limiting condition, but Carmel’s story of hope shows just how important that all-encompassing Hospice care and support is: “Most of our patients don’t have such dramatic changes when they come here, but it does show you what good care does and why it’s so important to fund good care.

“Without the generosity of our supporters, Carmel wouldn’t have achieved those things. To be able to send a 91 year old home, who came here to die, is just incredible.”